Ear-Tipping Cats: What It Is and Why It’s Done 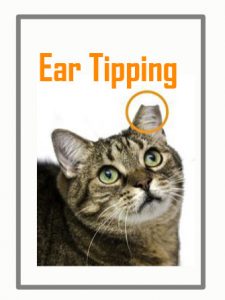 Ear-tipping involves surgically removing a small portion of one of a cat’s ears while the cat is under anesthesia for spay or neuter surgery. It is the universally accepted way to signify that a community cat has been spayed or neutered, which means no new kittens will be born, and that’s a good thing.

Too often cats are brought into clinics for surgery and have gone through the stressful process of being trapped, fasted, transported, anesthetized and sometimes even surgery, only to learn that they’ve already been fixed. By ear tipping, it’s possible for the trapper to be aware, even before trapping, that the cat is already fixed.

Does ear-tipping hurt the cat?

Ear-tipping is extremely safe and is performed while the cat is already anesthetized for spay or neuter surgery. There is little or no bleeding involved, and it is not painful to the cat. The ear heals up quickly and the tipped ear doesn’t detract one bit from the appearance or beauty of the cat.