Pet overpopulation is the number one killer of dogs and cats in the United States.

Each year, an estimated ten million dogs, cats, puppies and kittens are put to death in our nation’s animal shelters as a method of population control. The majority of these animals were young, healthy and adoptable. In addition, millions of abandoned pets and feral cats suffer on the street as they attempt to survive on their own.

How can you help prevent pet overpopulation?

The Answer: spay/neuter your pets! 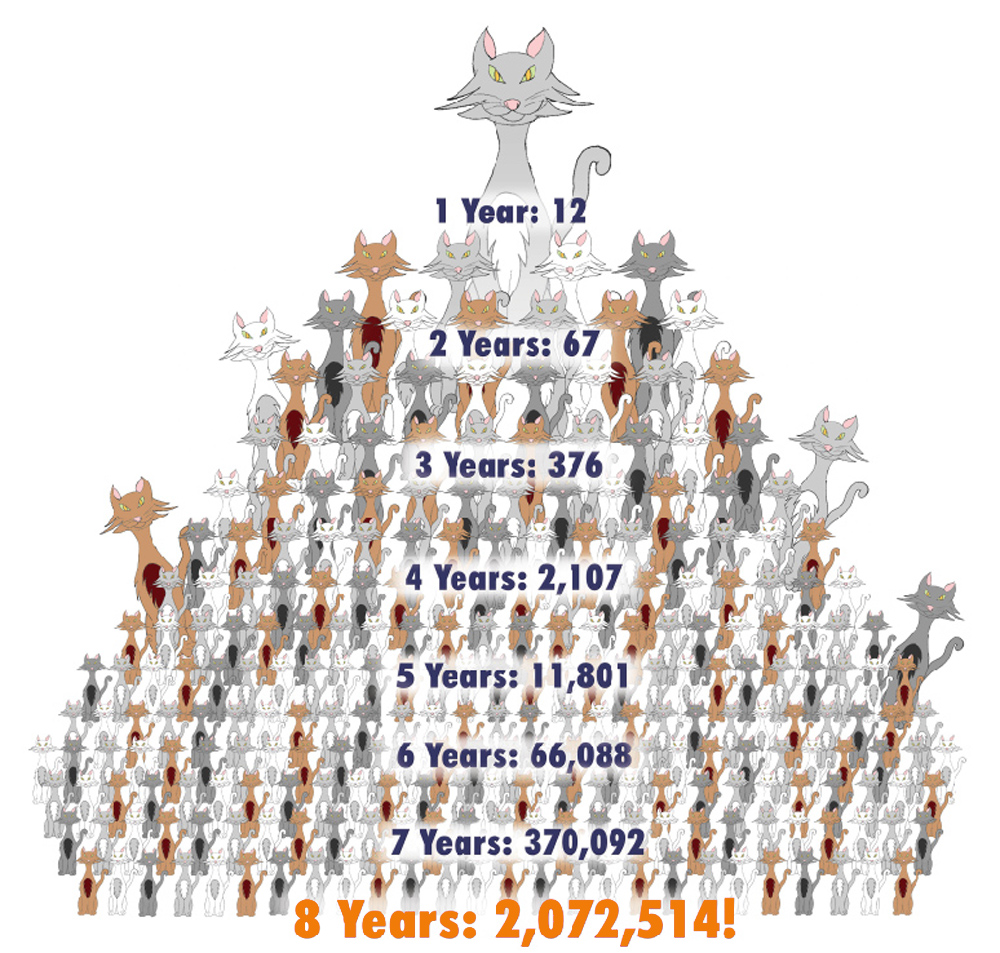 Myths about spaying and neutering:

Myth No. 1:  My kids need to experience the miracle of birth.

Fact:  Most animals deliver in the middle of the night by themselves. Kids can experience the birthing process by watching a video instead of at the expense of the family pet.

Myth No. 2:  My pet is a purebred and her personality is so good that I want her to have puppies.

Fact: One out of every four pets brought to the shelter are purebreds and most do not find homes. Just because your pet is special, there are no guarantees that her offspring will be anything like her. You have the father’s genes to consider as well.

Myth No. 3:  I can find homes for all of the puppies or kittens.

Fact: Even if you do find homes for the offspring, this means one less home for the millions of animals in the shelters waiting to get adopted.

Myth No. 4:  It’s better to allow your female pet to have at least one litter before spaying.

Fact:  This is grossly untrue. In fact, the exact opposite is true. Your dog will have much less chance of developing cancer of the reproductive organs and mammary tissue by spaying her before her first heat. Letting her have even one litter predisposes her to breast, uterine and ovarian cancer.

Most people think that veterinarians recommend spaying and neutering solely to help the pet overpopulation crisis. While this is certainly a major reason to spay, there are numerous health benefits for doing it as well.

Before we talk about the benefits of spaying, let’s define it. Spaying is the surgical removal of the reproductive organs, uterus and ovaries from a female animal. Spaying can be safely performed on animals as young as 8 weeks of age.

Animals in heat and pregnant animals can be spayed, although the risk of complication is a little higher. Spaying your cat or dog before they have their first heat cycle, which is usually at 6 to 7 months of age, will decrease their chances of developing breast cancer to almost zero.

Spaying or neutering reduces the risk of your pet dying of uterine or ovarian cancer. Spaying eliminates the chance of your pet developing a potentially life-threatening infection of the uterus called pyometra.

Spaying or neutering eliminates the mood swings and undesirable behavior that female cats and dogs display during their heat cycle, such as messy spotting, pacing, crying and trying to escape.

Spaying or neutering greatly increases the life span of your pet. Owners of sterilized pets have fewer vet bills.

Spaying or neutering helps decrease the number of animals that are euthanized at the shelters.

Provided by the Society for the Prevention of Cruelty to Animals Los Angeles.

Stop the cycle. Spay or neuter your pets.